George Bernard Shaw wrote “If history repeats itself, and the unexpected always happens, how incapable must Man be of learning from experience.” Museums of social conscience around the world remind us of tragic human errors in hopes we will remember and behave differently in the future.

We just returned from eighteen days working in Rwanda and enjoying some amazing national park experiences at Nyungwe National Park in the southwest and Volcanoes National Park in the north. On the last afternoon we had free time and visited the Kigali Memorial Centre, a burial site for 250,000 of the more than 1,000,000 people killed in the genocide of the early 1990s. It serves as a place for Rwandans to grieve and visit the gravesite of lost friends and family. For a foreign visitor it is a sober reminder of the realities of hate crimes and the lasting heartache for all affected.

The circular path of the exhibits in the stone building pulls the visitor through the sequential events leading up to and following the genocide. The local kinyarwandan language is at the top of each panel followed by French and then English. As an English reader, it meant my language of choice was at the bottom of the panels, which caused me to lean over a bit to read the text, but because each panel was organized in the same fashion, I knew exactly where to look to find the English version, which was much appreciated. I rarely read many of the labels in a museum. It usually is overload, but I read each and every word as we went through the story and watched every video. Tears streamed down our faces as we read the painful stories resulting in the slaughter of a million people, adults and children. The images are graphic and purposefully disturbing, the large murals haunting. 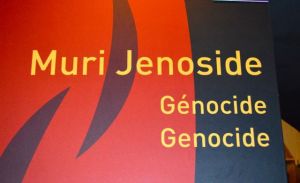 The videos contain interviews with survivors relating what happened to their mothers, fathers, sisters, brothers, children, wives and husbands. The pain in their eyes and voices is palpable. You cannot go through this place without being touched by the brutality and hurt of what occurred. One girl who saw her sisters and mother killed explained how she was protected by a neighbor and family friend, despite the danger it put him in. Some people tried to help as they could, but too many more were caught up in the fervor of harming others under the influence of an inexplicable campaign of hate initiated not by Rwandans but by those who colonized the country.

The last panels tell the story of the UN officials and the world standing by and watching while events unfolded. UN Secretary General Kofi Annan admitted his mistake in reducing troops instead of sending in more forces when requested. One of the more poignant stops along the way is a room full of snapshots of the deceased of all ages with another big video running with personal testimonies. The snapshots and personal stories are overwhelming. How do people live with such pain? How do they forgive and go on? Admirably, Rwanda has chosen a path of reconciliation, not revenge. 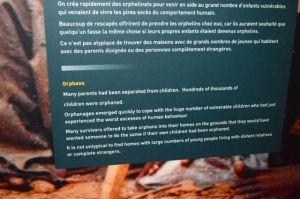 A room with glass cases containing skulls and leg bones from unidentified corpses is sad but not so emotional. The bleached bones are too cold and detached from the personal horrors of those who died. Yet the next room, filled with clothing and personal items recovered from those bodies, is chilling. Another room holds larger than life photos of small children with a plaque below each, giving the child’s name, hopes for the future and cause of death. It was hard to even breathe in there. And yet, I needed to read and learn of the children’s unrealized hopes and aspirations.

We walked out of the building and onto the path along the mass graves of 250,000 people. A group of middle school children were lined up along one of the massive gravesites, heads bowed in prayer. Here at the final resting place of those who died, the beautiful hills of Rwanda surround you in all directions. A peaceful garden frames the story beneath your feet, and you know that the extraordinary sadness will live on in the memories of all who were affected by this tragedy. 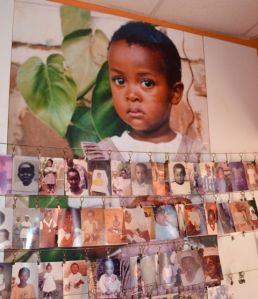 The Aegis Foundation of the U.K. and City of Kigali built the Memorial Centre together. The interpretation is thoughtful and powerful in telling the story. There is no charge to enter, but we felt compelled to leave a contribution to help support operations. I looked at Tripadvisor.com after getting home and noted the 150+ reviews with almost a 4.8 of 5.0 bubble average. Others agreed that this troubling story is worth your time at Kigali Memorial Centre to try and understand what occurred.

The exhibit hall at Kigali Memorial Centre includes a section on other genocides around the world. Their archive holds many books and research materials from the Rwanda Genocide and other similar events. Some people come to study and learn from the tragic years of conflict. Each of us tries to find hope in understanding the pain and devastation of such a conflict. We must hope there is a way to inoculate mankind from repeating such horrors.

One of the last panels in the Centre aptly expresses the Rwanda that we find today and we leave you with that thought.

Almost every corner of Rwanda was touched by the genocide in some way . . . Many families have someone who was either a victim, a perpetrator or a collaborator . . . It is impossible for us to forget the past. It is also extremely painful to remember. We remember the victims of the past because they were our family and friends – they should still be here.

We also remember the events of the past. It is a terrible and unavoidable warning for our future, if we do not take active steps to avoid it all over again.

2 thoughts on “The Kigali Memorial Centre in Rwanda”