We recently returned from speaking engagements in Korea and a visit with Masa Shintani and his family in Fujinomiya, Japan. Our friends lived in the town of Shibakawa until 2010 when it was incorporated into Fujinomiya, a city of about 130,000. Since 1942 this city has grown from the merging of several very old small towns at the foot of Mount Fuji, or Fuji-san as many refer to this sacred spot.

We were fortunate to be there during the Fall Festival, an annual event that brings about 20 of the distinct communities within the city together in a unique manner. As we walked toward the Shinto Shrine, the Fujisan Hongu Sengen Taisha, which serves as the center of the event, we encountered the first “dashi,” a kind of heritage float.

Dashis are about 9 feet wide by 12 to 15 feet long and ten to 12 feet high. They are made from wood and roll on steel-rimmed wooden wheels. Elaborate wood carvings adorned the dashi and a team of people dressed in traditional garb push and pull the dashi down the street using ropes and five-inch diameter tree limbs about four feet long for steering. Making turns requires a choreographed effort

that involves pivoting the entire dashi atop a wooden platform jack. A front porch on the dashi rises about six feet above the street with three taiko drums mounted on the platform with space behind them for drummers and other musicians. This first one we saw was just making its way toward the shrine. By the end of the day, twenty dashi would be lining the streets.

We walked on to the shrine and found a hundred or more food and game booths on each side of several streets that converge on the shrine. Hundreds of people were there by 11 AM and there would be thousands by sunset. We stopped first to sample the sake in the administrative booth, which makes a donation to the event at the same time. Sake is served in small square cedar boxes, which gives it a distinctive woody flavor and scent.

We stopped first at the shrine to do a traditional prayer. That requires a small donation to the shrine tossed into a wooden altar followed by two bows, two hand claps, make a wish, and one more clap of the hands. We learned that it’s important that the wish be for someone other than yourself, which seemed entirely reasonable.

After enjoying a light street food snack of chicken teriyaki on a stick, French fries, potato sticks, cotton candy and Asahi beer (shared between five people), we had a more substantial lunch of udon noodles and tempura at a local noodle house. It sounds like too much mismatched food and that’s accurate, but we enjoyed it as you would at any fair or festival.

By 4 PM the twenty dashis and their push/pull teams lined up on the streets right in front of the shrine in pairs, facing each other. After a meeting with the judge of their competition each team began beating drums, playing flutes and banging brass cymbals. They each rolled forward towards the other, until the frames of the dashis were almost touching, with musicians hanging off the front, glaring at each other while trying to put their opponents off beat. The battle of the bands continued for about eight minutes. Finally they rolled back 30 or 40 feet to catch their breath and then they charged each other again for another couple of minutes of close competition. This all included lots of enthusiastic noise from the push/pull teams who must be both reckless and careful to push and pull the dashis to get them rolling and then stop them when faces are just inches apart. Finally they rolled back for the judging, conducted by a team of observers, and the head judge announced a winner. 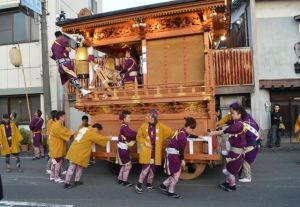 Each team competes with all the other teams before the night is done. We witnessed two battles, each with judgments of a tie and expected some disagreements but the decisions seemed to please everyone as the team captains showed their respect to each other and toasted with sake in the center of the street.

Then the bon dancing began. Both teams and their community representatives gathered in long oval circles between the dashis. Music floated out of one of the dashis and they all danced in a coordinated manner with elaborate foot and hand gestures that had obviously been practiced with great care. Older women in matching kimonos would be a part of each line along with the men and women in matching team outfits as well. Children in similar outfits formed an inner circle and did their own variations of the dances.

It was incredibly fun and went on for five hours for three evenings, November 3rd, 4th and 5thwith the dashis being moved between bouts to take on a new foe. I suspect this is all highly coordinated by the festival committee, but it seemed liked slightly organized chaos at times. A gentleman in his 70s

invited me into the bon dance and I gave it a try, proving I cannot learn any new dance in five minutes, but it elicited lots of smiles and handshakes nonetheless. It was fun.

Lisa and I went down a side alley of food services and enjoyed delicious pork stuffed buns with some cold green tea to cap off the evening. The festival was memorable in sights, sounds, smells, tastes and movement. All of our senses were a part of the feast. Our friends were with us through the day and evening so it was a special event in every way.

Traditions like the Fujinomiya Fall Festival are unforgettable, like the Fiesta de San Fermines and running in front of the bulls in Pamplona every July. They define the “brand” of the community and mark the passing seasons. If you get to Japan in November, don’t miss this one. Wear your dancing shoes and don’t eat before you get there. Take a camera. It’s a feast in every way.