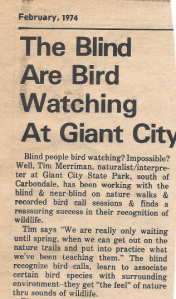 I just spent several days digging through three boxes of personal family photos. Among the photos were news articles my mother had saved for me, including one entitled “Birdwatching for the Blind.” It took me back to 1974 when I was a naturalist-interpreter managing a Visitor Center at Giant City State Park in Makanda, Illinois. A former student, Kay Roney, had been in a biology class when I was a Teaching Assistant. She came through the center and we had a great conversation.

She reminded me that I had mentioned in class years earlier that blind people could birdwatch by listening to their songs. She explained that she worked for Illinois Children and Family Services as a counselor for the blind. She had glaucoma and cataracts and had serious visual impairment herself. She wanted to organize her clients into a class that would include trail hiking and an explanation of how they might “birdlisten.” It was a great program idea for both of us so we agreed to a plan.

Over the next year we organized a variety of outings that included the opportunity to touch birds and listen to their heartbeats while we banded them. Some who were born blind commented that they had not had any concept of how fragile a bird’s wing was. They were amazed by the rapid heartbeat of chickadees and titmice.

I also used commercial recordings of the 20 most common birdsongs of the area and developed a cassette tape that included the birdsong and a description of what you could learn about the habitat from hearing the bird. A wood thrush tells you a mature forest with leaf litter is nearby. A prairie warbler song tells you you’re in an old field or prairie area with grasses and scattered trees. I attempted to convey a sense of place for our blind students based on cross-referencing the songs being heard. They enjoyed the outings and I learned a great deal about their challenges in going to the outdoors. One outing to the nearby wildlife refuge allowed them to touch Canada geese, a great contrast to the tiny songbirds.

We built a blind-accessible trail with an Institute of Museum and Library Services grant near the visitor center. From planning to implementation, the blind students advised us and completely changed our ideas of what a trail for the blind should be. They wanted a cassette player for interpretation, not the braille guide we had planned. They preferred ground texture cues to follow the trail with gravel strips indicating steps instead of a kick rail along the path for using a cane. Our assumptions about their needs were wrong and their solutions were actually easy to implement and much appreciated.

The program attracted national attention in the visually impaired community. Two blind people from Chicago, journalists for a specialized audio magazine for the blind interviewed us out on the trail. The program ran its course over a year or so and eventually ended but it was a stimulating experience for all involved.

Finding the article from 1974 led me to use a search engine to see if birding with blind people was being done other places and more recently. Texas Parks & Wildlife lists six tips on birding with the blind that are useful. Several stories were posted in 2013 by CBS and Cornell Laboratory of Ornithology on a program entitled Michigan Bird Brains by Donna Posont, Donna, the teacher, is blind and so are her students. They explore nature by touch, scent and sound together.

I learned it’s always best to test your accessibility ideas with people who will actually use them. Birdwatching or birdlistening can be a very engaging program for blind people in your community and an opportunity to put sighted and blind people together in nature to learn from each other.