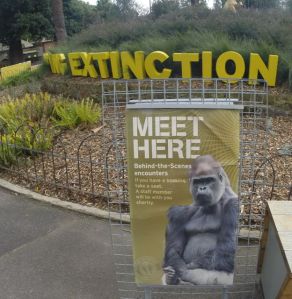 We recently enjoyed training twenty-eight interpretive professionals from Victoria, New South Wales, and Tasmania in a day-long interpretive planning workshop at the Melbourne Zoo. Zoo personnel kindly invited us to explore the Melbourne Zoo and Healesville Sanctuary, two of the three Victoria Zoos, in our remaining days in the Melbourne area and we took them up on the offer.

Perhaps what we enjoyed most about the Melbourne Zoo is the clear message that this zoo is about fighting extinction. It’s not only pervasive throughout the interpretive text, but it’s written in bold letters across a landscape feature that draws visitor attention immediately on entering the zoo grounds. Interpretive signs remind visitors that there are things they can do to help in this effort, both at the zoo and at home. A gorilla telephone challenge invites 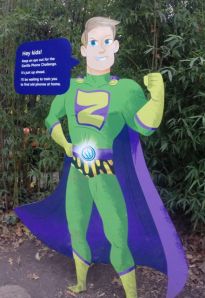 visitors to recycle older cell phones to make an investment in protecting gorillas. The use of a “zooperhero” action figure and engaging language really brings young people to the cause. Teens and preteens are often considered a more difficult audience to reach but this approach targets their interests in both animals and phones and gets them involved in fighting extinction. The zoo provides prepaid mail-in envelopes to make it easy for guests to take action after they return home.

Melbourne Zoo definitely designs guest experiences that interpret animals of the world with a focus on the threats and options in protecting animals. Many of their exhibits seem to be in transition to habitats that enclose people in the environment of the animal, rather than caging the animal in a more human-centric environment. Animal identification signs make the experience more personal, providing the name of the animal (what the keepers call him or her) and its individual likes and dislikes rather than the more standard zoo sign that offers only scientific and common names, distribution, and status. The species information is also provided, but isn’t the main focus. We found this approach appeared to more fully engage visitors with the animals, building a bridge of familiarity from one representative animal to the entire species. It seemed to meet people where they were, instead of expecting non-biologists to be excited about the scientific knowledge of the species found in more traditional zoo approaches.

After leaving Melbourne, we drove over to Healesville Sanctuary an hour to the east of the city. The guest experience staff met us at the gate and introduced us to Murrundindi, the ngurungaeta (elder/leader) of the Wurundjeri people. At 69 years of age he remains a vigorous spokesman for his people and Victoria Zoos. In the past two years the Sanctuary has formalized the stories of his people using his personal and family stories as examples in exhibits and sculptures along a cultural trail that winds throughout the grounds. His storytelling skills and passion for sharing his culture with people is commanding. We were honored to have him spend time with us, helping us to understand a bit of his history as he told us of his painful transition from hiding his aboriginal history to sharing it with the world. It was wonderful to sit with him in the café and have him explain some of the artifacts he holds dear and get some first-hand tips on playing the didgeridoo. 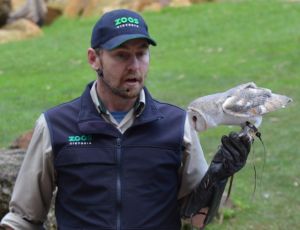 The Healesville Sanctuary shares the story of aboriginal people while displaying native Australia animals in a beautiful forest environment. We were encouraged to watch a bird show with trained parrots and raptors. It’s a very entertaining show but it goes beyond the typical bird show. The core of the program was a message about using recycled paper products to preserve native forests that provide nesting and foraging habitat for the species of birds being flown in the show. The keepers explained how each species of cockatoo and raptor plays key roles in the ecosystems of Australia. We have seen other bird shows in parks and zoos, but this experience was exceptional in matching messages to the natural history stories and ecosystems.

Blending the natural and cultural heritage of Australia as they do so skillfully at Healesville Sanctuary makes a lot of sense. Landscapes, animals, and people are inextricably linked together and understanding those 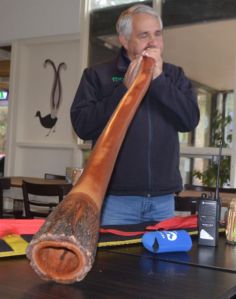 connections can be difficult when animals are pulled out of context into cages. Braiding the stories of native species, native peoples, and native plants throughout the visitor experience helps facilitate connections for people in a way that rarely happens in zoo settings. Like the Melbourne Zoo, Healesville Sanctuary is in transition as it updates exhibits and programs, but we definitely think they’re headed in the right direction and look forward to returning some day.